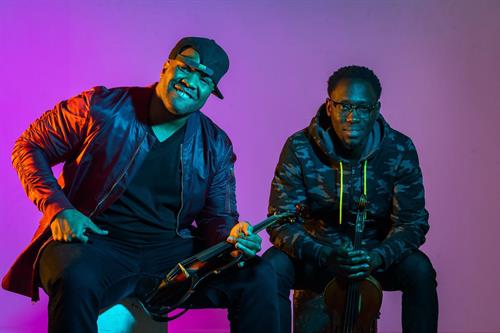 Classical-meets-hip-hop duo, Black Violin, returns to Muriel Kauffman Theatre for their Impossible Tour 2020. Violist Wil Baptiste and violinist Kev Marcus have crafted a style that’s often described as “classical boom,” aiming to change perceptions of classical and hip-hop music. For 16 years, Kev Marcus and Wil Baptiste have been merging string arrangements with modern beats and vocals. The two were classically trained on the violin and viola through their high school and college careers. Post-college, they reconvened to produce beats for South Florida rappers, and began building an audience in local clubs.

They later went on to win Showtime at the Apollo in 2005, and eventually sold out headline performances at venues across the country, including a sold out two-night headline run at The Kennedy Center in 2018. Their unique brand of was celebrated with collaborations with Alicia Keys, Wu-Tang Clan, 2 Chainz and others. NPR took note and declared “their music will keep classical music alive for the next generation.” UPROXX also featured Black Violin in a mini-documentary as part of their “Uncharted” series. Watch the documentary here.

Tickets for Black Violin range from $29 to $59, plus applicable fees